Why Diamonds Are Used In Engagement And Wedding Rings 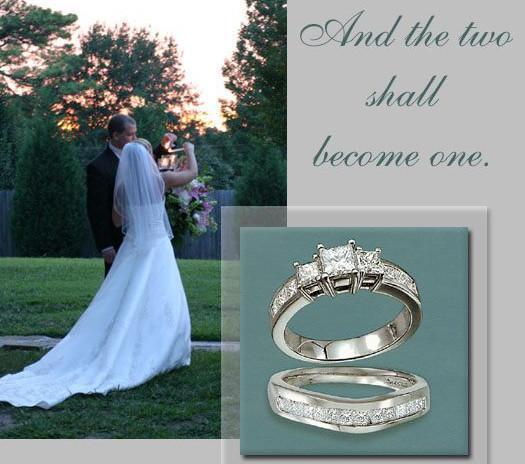 In celebration of those loving couples who are about to tie the knot, we offer this wonderful exploration of why diamonds are used for the purpose of engagement and wedding rings. The practice wasn't always so. Many factors came to influence this now common practice, none the least of which was profit. But let's start at the beginning.

The diamond's moniker is derived from the Greek word adamas, a word meaning “unconquerable"; befitting for a stone that holds the highest position for hardness on the Mohs scale and one in which can stand the test of time to symbolize love. Today a man presents his prospective bride with an engagement ring upon acceptance of his marriage proposal. Anthropologists believe this tradition originated from a Roman custom in which wives wore rings attached to small keys, indicating their husbands' ownership.

The first ever-recorded account of a diamond used for matrimonial purposes was in 1477, when Archduke Maximillian of Austria presented a diamond engagement ring to his betrothed, Mary of Burgundy. This act of love, elaborate and avant-garde for its time, sparked a new trend for the aristocrats and nobles throughout Europe.

The sentimental Victorians popularized ornate engagement ring designs that mixed diamonds with other gemstones, precious metals and enamels. Often these rings were crafted in the shapes of flowers and were dubbed “posey rings.” Diamond rings crafted during the Edwardian era continued the tradition of pairing diamonds with other jewels, commonly mounted in filigree settings.

When De Beers opened their diamond mine in South Africa during the 1930’s, diamonds became so accessible; the American market no longer viewed the stone with such high regard. The accessibility and the decline of America’s economic state during The Great Depression, diamond sales plummeted, and De Beers was forced to come up with a savvy marketing campaign.

De Beers turned to ad agency N.W. Ayer who did exhaustive market research to figure out exactly what Americans thought about diamonds. What they found was that diamonds were considered a luxury reserved only for the super wealthy, and that Americans were spending their money on other things like cars and appliances. To sell more and bigger diamonds, Ayer would have to market to consumers at varying income levels.

The agency realized they needed to come up with a way to link diamonds with something emotional. And because diamonds weren't worth much inherently, they also had to keep people from ever reselling them. What was emotional, socially valuable, and eternal? Love and marriage. Bingo. According to New York Times, N.W. Ayer's game plan was to "create a situation where almost every person pledging marriage feels compelled to acquire a diamond engagement ring."

With the end of The Great Depression, the economy began to stabilize, and people everywhere were able to spend lavishly once more. It was at that time that De Beers released the greatest campaign the diamond would ever know, “A Diamond Is Forever”. Those four iconic words created by their agancy have appeared in every single De Beers advertisement since 1948. AdAge named it the #1 slogan of the century in 1999. The campaign reconfirmed the diamonds place in the tradition of holy matrimony and helped diamonds, once again, become synonymous with everlasting love.

Over the years, the most popular cut for diamond engagement rings has always been the round brilliant, consisting of 58 facets that divide the stone into a top and bottom half. The round brilliant stone when cut and polished by an expert sparkles with a brilliance that can be seen across a room. Other cuts that are popular include the princess cut (square shape - see image above), emerald cut (rectangular) and the oval. Whichever you prefer, a diamond will signify the celebration of the union of "two into one" and a cherished memory to share forever.