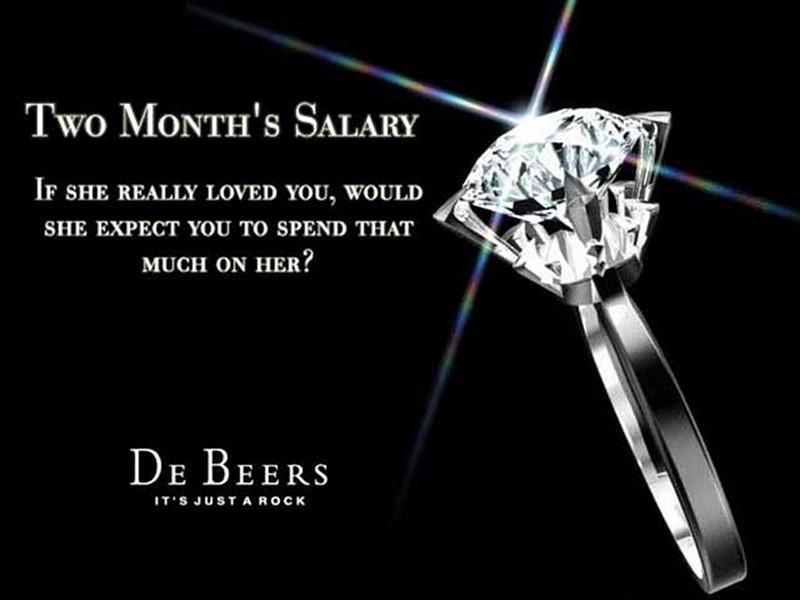 In the 1953 classic Hollywood film, Gentlemen Prefer Blondes, Marilyn Monroe, gave a legendary performance. Clad in a bright pink ball gown and dazzling diamonds, she epitomised the significance of diamonds with her upbeat and seductive song: Diamonds Are a Girl's Best Friend. Since the 1950s, a diamond engagement ring has become the obsession of American women influenced by the advertising industries that combined desire with commerce and went onto to say, "Diamonds are forever."

In recent years, after a decade of negative press about 'blood diamonds' and the deplorable working conditions in the mines of Angola, Sierra Leone, Namibia and the Democratic Republic of Congo, women still associate diamonds with romantic love. High-end retailers guarantee "conflict-free" diamonds by certifying that those diamonds have not financed a civil war, and the mining companies have avoided serious environmental harm, child labour and worker exploitation.

An average engagement ring in an affordable store costs $4,000. A rich girl's engagement party is unthinkable without a stunning Harry Winston ring. A one carat HW engagement ring begins at around $15,000 and goes up to $25,000 to $50,000 range and up.

The natural formation of diamonds takes millions of years to become the objects of desire. Aside from the clichés, diamonds are the most expensive of stones. Because of the diamond's "four carbon molecular structure, it is the hardest and the most invincible of all matter."

Most women desire at least one diamond ring on her finger. Is the appeal of this gemstone so great that it has become a synonym for steadfast love, romance, beauty, value, self-worth, pride, glamour, seduction, luxury, and ultimate happiness?

A diamond ring on a woman's finger is generally taken as a sign that she is loved and cherished. When a woman wears a diamond, she is showing the world that someone who loves her gave it to her. And she remembers the money he spent on her. Long after she is gone, the diamond will remain as a family heirloom, and as a testament to her living here on earth. She will be eternalised because diamonds are forever.

In case of a broken relationship or divorce, a woman generally gets to keep it and forgets that the ring was a symbol of lifelong partnership. They justify by thinking that love isn't forever, but diamonds are! It is better to hold onto the diamonds than unreliable men. I recall an American friend of mine once telling me, "I never hated a man enough to give him his diamonds back."

Only a tiny section of women who are not stranded in a cultural mess believe that diamonds represent commercialism. These are women who are not victims influenced by the materialistic values like Madame Loisel in Guy de Maupassant's story, The Necklace. In the story, Loisel suffered silently because she believed that poverty is a curse and she was born for luxury. She felt tormented and insulted about being poor. To attend a ball, she once borrowed a diamond necklace from her rich friend, Madame Forestier and lost it. Madame Loisel and her husband went into enormous debt to buy a replacement necklace for her friend, and ended up living in extreme poverty. The story has a twist ending as her rich friend's necklace was only an imitation, not made of real diamond. To endorse low-cost luxury and as an alternative, some rich women wear replicas. Madame Loisel finds that out after ten years when she ran into her friend in Champs Elysées.

The universality of the story is relevant as characteristic of any society where many women hide behind expensive jewels and clothes, in order to assert their social position.

For a lot of fashion-conscious women, the lines between fine and faux jewelry have merged. They admire the aesthetic components of authentic jewels without really caring about whether they have a big diamond ring on their finger or not. Late Princess Margaret once told American actress Elizabeth Taylor that she thought her diamond ring was vulgar. Some women with great taste do not get swayed, and consider diamond as one of the most desired commodities in the world. But those women are very few and far between. I haven't met that many women who don't go gaga over the appeal and mystique of these stones.

Then can anyone really blame women for wanting diamonds? The British businessman De Beer, early on, since the 1888s recognised that by creating a myth that diamonds are scarce and inherently valuable; he targeted young men and women to make a profit. The company knew how to protect its investments and buoy diamond prices. De Beers is the company that basically told women, "Hey, ladies, marry for diamonds."

Today, De Beer is the world's largest supplier of raw diamonds and controls all facets of the diamond trade. The company, with their creative marketing, promotions and logos like, "A moment to last forever," has insinuated such messages in the minds of young men and women. The diamond retailers make men believe that it is synonymous with romance and a measure of a man's love for a woman. In turn, women are convinced that a courtship concluded in a splendid diamond engagement ring means how much she is adored. The bigger the rock, the greater is the measure of love.

A guy with a good job would have to be able to willing to spend his two/three months' salary to purchase the ring, because he knows that is what she is waiting for as a symbol of forever. This reminds me of a young couple that I know. A few months ago, they got engaged after a very brief courtship. Certain people were making comments about the validity and seriousness of the commitment. Without losing his cool, the man in question said with conviction, "If you look at my VISA bill, you will realise how much I want this woman to be my wife." That statement made the doubters back off, and the wedding went off without a hitch.

No one can deny that the exquisiteness of a diamond speaks for itself when it reflects light beautifully. There is a certain aura about the sparkling brilliance of diamonds that is not comparable to anything else. The glamour and attractiveness of these gemstones is very desirable to women. Let's not forget the endlessly clever marketing strategies of the retailers during Christmas season, and prior to Valentine's Day. Those advertisements will make any fashionable and dreamy woman want diamonds, particularly the ones like Madame Loisel, who fantasises about a luxurious lifestyle.

From famous movie stars like Marilyn Monroe, Elizabeth Taylor and American singers like Rihanna to Napoleon Bonaparte have been entranced by these sparkling stones. In 2013, Joséphine's diamond and sapphire engagement ring sold for 730,000 Euros in France at an auction.

American novelist F. Scott Fitzgerald, buried a few kilometres from my home, uses diamonds in several of his fictions to "evoke the feeling of rapacious, destructive wealth and greed," such as in his novella The Diamond. He refers to one woman in The Great Gatsby as an "angry diamond."

We know that the world's largest diamond Koh-i-Noor (110 carat) is associated with a curse and lust as depicted in a 14th century Hindu mythology: "He who owns this diamond will own the world, but will also know its misfortune." Now it is part of the Crown Jewels in Great Britain worn by the female monarchs. But it has often been in the centre of diplomatic squabbles since the Partition of India.

Diamonds are highly regarded for longevity and commitment of everlasting love; it is a bit ironic that in a damaged relationship it has come to suggest the fragile nature of love and romance. In that sense diamonds can also be associated with the pain, sadness and disappointments of love. Elizabeth Taylor's foremost jewelry collections valued at $30 million from her seven husbands will attest to that. The comparison of true love and diamond doesn't always go hand in hand.

Nonetheless, a woman's love affair with diamonds will survive for ever. For a woman, a diamond solitaire engagement ring remains an inevitable choice to represent a beautiful moment as a gesture of true love, commitment and happily ever after.

Photos of prominent Hollywood celebrities exchanging vows with pricey diamonds rings (that are cut and designed exclusively for them) in the newspapers and magazines constantly reinforce the link between diamond and romance. Diamonds have been made a metaphor for invincible and steadfast love. This has puzzled men ever since the use of diamond became popular.