The inflection point was July. Conditions have deteriorated since.

Active listings of houses and condos for sale in October in King County – which includes Seattle and Bellevue but does not include Tacoma – nearly doubled compared to October last year, jumping 91% to 5,749 listings, according to data by the National Association of Realtors. This was the largest inventory for sale since the end of Housing Bust 1 going back to 2012.

Inventory for sale started surging off low levels in the spring. In July, it reached the highest level since October 2014; and it continued to soar from then on. By this measure, July marked the inflection point of the housing market in King County. An inflection point is the beginning of the downturn in a market. It’s when the rising line representing the market bends (inflects) and starts going downward. The red bars in the chart mark the months following the inflection point (all data below via realtor.com[1]): 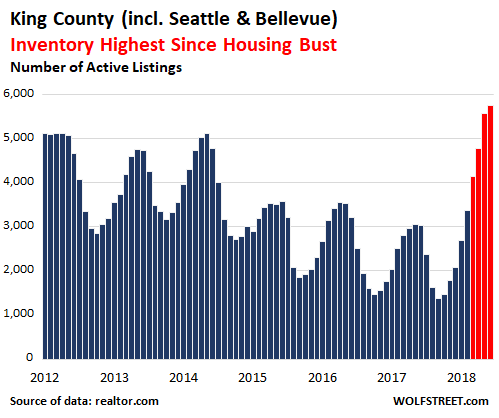 And cuts in asking prices explode. When inventory piles up and sales cannot keep up because potential buyers aren’t buying, motivated sellers roll up their sleeves and see what it takes to move the house or condo, and what moves it are price reductions that are deep enough to meet the market. The market is where buyers are, but they have retreated and sellers are now having to find them. Gone are the price wars when buyers jostled for position for their chance to drive the price even higher.

The chart below shows the number of price cuts per month in King County. By this measure too, the inflection point occurred in July, when price cuts reached the highest point since October 2014. And over the following...