As the Federal Debt Hits $21.7T, Nobody in Washington Seems to Care

The President. The Senate. The House. Their silence on the issue tells you all you need to know.

Forget any semblance of fiscal responsibility. Washington has completely given up on bare-bones fiscal sanity.

What would you call a ceiling that has been that demolished four times? Surrounded by the assorted rubble, you wouldn’t feel the raindrops on your head, see the storm clouds gathering, and think “Hmm, what’s wrong with the ceiling?” You’d think, “Damn. There’s nothing there.”

And there isn’t. Between the absurdist mock-constraint of a debt “ceiling” that everyone knows can be ignored and the overheated faux-panic about “government shutdowns” (which don’t seem to affect much of anything, even when they happen), there is literally nothing stopping politicians from debt spending at will except, well, their will.

Since the Tea Party came to a quiet and undistinguished end, paying any attention to government spending has gone far out of fashion.

And why not? We have a president who, after promising to not just balance the budget, but pay off the entire existing US debt balance[1], is on pace to add more debt in just four years than even Obama did in eight[2]. And Obama added an eye-watering $8.5T!

This is not a partisan issue. Without looking at the dates along the x-axis, see if you can tell the difference in fiscal policy between the Obama administration and the Trump administration: 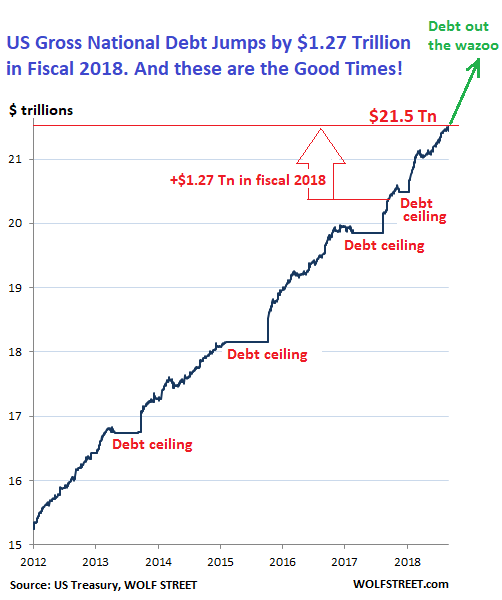 No difference. It doesn’t matter what politicians say, because they all do the same thing. Spend money they don’t have in a desperate attempt to make halfway good on promises some previous president made. Their non-solution solution is always the same. Their answer to bad debt is more...