Copper prices[1] reached their lowest levels in a year on Thursday amid concerns that a global trade war could strain global supply chains and slow down the global economy.

"Dr. Copper," as it is sometimes referred to by economists and finance experts, is often seen as a leading indicator of future economic trends since it is used in a number of different sectors. Copper is used in home construction and consumer products, as well as manufacturing. 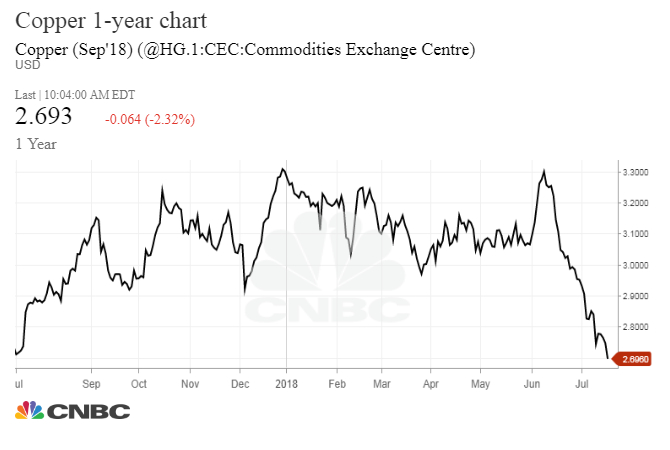 The U.S. has levied tariffs on steel and aluminum imports from China, the European Union and Mexico. The EU, China and Mexico have retaliated with tariffs of their own.

The metal was also approaching bear-market territory as it traded nearly 20 percent off its 52-week high. Copper shot up nearly 32 percent last year as investors bet on synchronized global economic growth around the world.

Analysts at Citi, however, think that copper is setting up to be a buy for investors. "The ongoing major sell-off, driven by escalating trade frictions between the US and China, is setting up a longer term buying opportunity. Here we look beyond the potential trade war to longer term copper market fundamentals and we find that current prices ... are nowhere near high enough to enable the market to clear," they said.