NIRP Did It: I’m in Awe of How Central-Bank Policies Blind Investors to Risks

It’s paradise for US companies looking for cheap money. They range from sparkly investment-grade companies, such as Apple with its pristine balance sheet, to “junk” rated companies, such as Netflix with its cash-burn machine[1]. They have all been doing it: Selling euro-denominated bonds in Europe.

The momentum for these “reverse Yankees” took off when the ECB’s Negative Interest Rate Policy and QE – which includes the purchase of euro bonds issued by European entities of US companies – pushed yields of many government bonds and some corporate bonds into the negative.

By now, yields in the land of NIRP have bounced off the ludicrous lows late last year, as the ECB has been tapering its bond purchases and has started waffling about rate hikes. Investors that bought the bonds at those low yields last year are now sitting on nice losses.

But that hasn’t stopped the momentum of reverse Yankees, especially those with a “junk” credit rating.

Bonds issued in euros in Europe by junk-rated US companies hit an all-time record in the first half of 2018, “taking advantage of decidedly cheaper financing costs in that market,” according to LCD of S&P Global Market Intelligence[2].

In the first half, US companies sold €8.2 billion of these junk-rated reverse-Yankee bonds, a new record (chart via LCD): 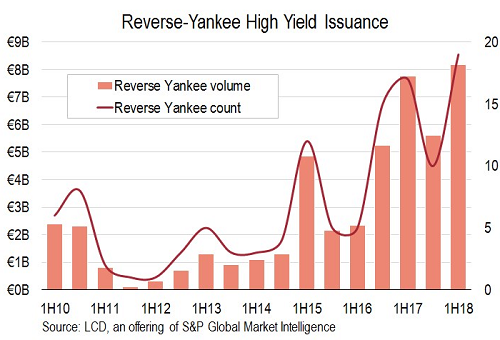 These bonds are hot for European investors who are wheezing under the iron fist of NIRP that dishes out guaranteed losses even before inflation on less risky bonds. Anything looks better than bonds with negative yields.

And here is why it makes sense for US companies to chase this money: It’s still ultra-cheap particularly for lower-rated companies. The...