Update on the Fed’s QE Unwind

With QE, the Fed created money to buy securities and pump up asset prices; now it sheds securities to destroy this money.

Here’s what the Fed’s QE unwind – or the balance sheet normalization, as it calls it – is all about: it reverses over an unknown span of years a large part of what QE had done over the span of five-and-a-half years. During QE, whose stated purpose was the “wealth effect,” the Fed amassed $3.4 trillion in Treasury securities and mortgage-backed securities (MBS). Just as the Fed spent a year tapering QE to zero, it is now spending a year ramping up the QE unwind.

Total assets on the Fed’s balance sheet[1] for the week ending July 4 dropped by $29.4 billion over the past four weeks. This brought the total drop since October, when the QE unwind began, to $171 billion. At $4,289 billion, total assets are now at the lowest level since April 16, 2014, during the middle of the “taper.” 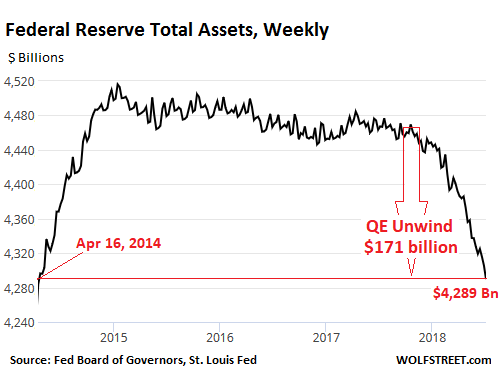 The Fed’s announced plan calls for shedding up to $420 billion in securities this year and up to $600 billion a year in each of the following years until the Fed considers its balance sheet to be “normalized” — or until something major goes awry. For June, the plan calls for the Fed to shed up to $18 billion in Treasuries and up to $12 billion in MBS. So how did it go?

The step-pattern in the chart below is a result of how the Fed sheds securities. It...