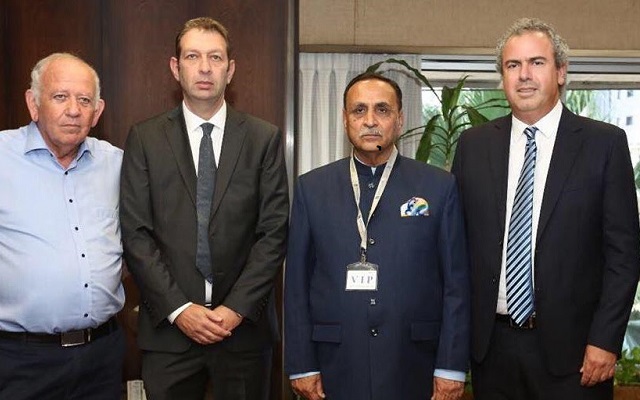 (IDEX Online) – The Israel Diamond Exchange (IDE) has hosted an official visit of a high-level delegation from the State of Gujarat, India, where IDE President Yoram Dvash and Chief Minister Vijay Rupani spoke of the close connection between the diamond communities of both countries.

Dvash and Rupani spoke about the growth and prosperity that the diamond trade brings to both sides, and discussed ways to improve the business ties between the two industries.

Dvash told his guests about the difficulties presented by the 6% tax levied by India on polished diamonds. “The tax makes it very difficult for Indian diamantaires who buy polished goods in Israel and for Israeli diamantaires who wish to trade with their Indian counterparts,” said Dvash. He also told the Minister that in discussions with leaders of the Indian bourse he discovered that reduction of this tax is a common interest of both Indian and Israeli diamantaires.

Minister Rupani agreed that free trade between the two industries is of great importance to both sides and promised to look into the matter.

Chief Minister Rupani was accompanied by several ministers from the State of Gujarat, as well as India’s DCM and Head of the Commercial Wing Dr. Anju Kumar. On the Israel side, the meeting was attended by Israel Diamond Controller Danny Tal, Israel Diamond Institute Chairman Boaz Moldawsky, Israel Diamond Manufacturers Association Chairman Jacob Korn and senior Israeli and Indian diamantaires.