In case you’re unfamiliar with the 1966 movie The Russians Are Coming![1], it’s a fun romp about a Russian submarine that accidentally runs aground off the New England coast during the Cold War and the local residents who panic and think they’re being invaded. I remember laughing a lot as a kid at some of the antics.

But it’s no laughing matter what Russia is doing to the US today. Most gold investors know that Russia has been accumulating gold at a rapid pace since the financial crisis in 2008. But now they’re suddenly dumping US Treasuries, too. In other words, they’ve ratcheted up their efforts to reduce their exposure to American fiat currency while simultaneously continuing their relentless accumulation of real money.

Here’s what this one-two punch looks like, and what it could mean…

The reason Russia’s sale of US dollar-denominated bonds is suddenly front-page financial news is because of their extreme action in April, the most recent month reported. Their central bank dumped $47 billion-worth of US securities (bonds, notes, and bills). Russia sold half of their total Treasury holdings in one month! 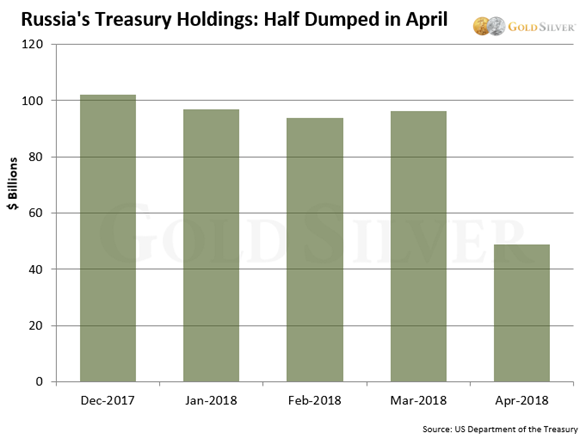 This most recent liquidation conforms to a larger trend initiated by the Russian central bank seven years ago. Since 2011, Treasury holdings have been slashed by over two-thirds, from over $150 billion to less than $50 billion. It’s clear that Russia wants to get rid of US Treasury securities.

Part of the reason is certainly due to the numerous rounds of sanctions imposed against Moscow by Washington. But it’s unlikely Russia’s response is solely due to sanctions, because other countries are following the same course of action. Consider:...