Efforts by the US to suppress gold prices in order to prop up the dollar are allowing Russia and China to build up huge reserves of physical gold by purchasing large quantities of the precious metal at significantly lower prices.

Net central bank purchases in the first quarter of the current year surged by 42 percent compared to the same period a year ago, totaling 116.5 tons, according to data compiled[1] by the World Gold Council (WGC). The number reportedly represents the highest quarterly total since 2014. 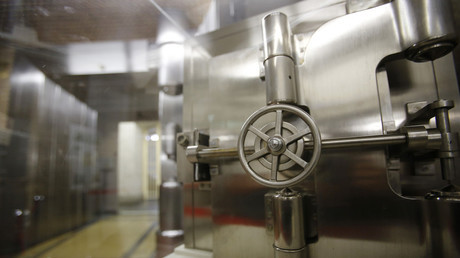 Over the past two decades, Russia has been ramping up the purchases of physical gold. In May, the country's gold reserves surged to 1,909 tons, Russia's Finance Ministry reported. Since 2000, the country’s gold reserves have surged by 500 percent.

Russia remained the most prolific purchaser of gold in the first quarter of 2018. The country’s holdings currently account for 18 percent of total reserves, according to the WGC.

Last month, Russia managed to force China out of the top five gold holders, which also includes the United States, Germany, Italy and France. However, China is not far behind, with a reported 1,843 tons of gold held in its national reserves.

China and Russia, along with Turkey, India and other countries have been aggressively accumulating gold reserves in a bid to diversify their reserve financial assets from the greenback that currently serves as the global reserve currency.

The tendency presents a perfect opportunity for investors to buy gold or shares in gold mines, while putting the US dollar’s dominance at risk as the main global reserve currency.

Many gold investors say the price of the precious metal is artificially...