Now comes news that the Fed has privately placed the bank on a list of ‘troubled’ lenders, meaning that DB has had to run decision-making through the Fed for at least the past year. A process that, until now and despite being a publicly traded company using the capital of untold numbers of investors, has been shrouded in total secrecy.

The bottom line is this: Deutsche Bank is unequivocally too big to fail. No matter how catastrophic their bad bets have been, no matter how criminal their behavior, they will be bailed out on the backs of global taxpayers.

A potential death star smack dab in the middle of global finance, this diagram sums up the systemic risk posed by DB and its 2x-larger-than-world-GDP derivatives book: 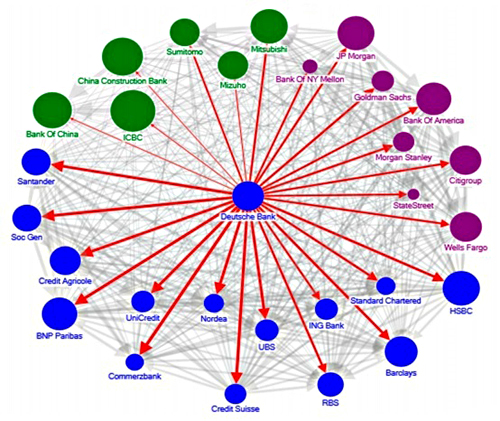 Deutsche Bank (DB - Get Report) shares fell sharply Thursday after the Wall Street Journal reported that the Federal Reserve has deemed the German lender's U.S. operations as "troubled" in a previously written assessment that hasn't been made public.

The assessment effectively meant that the bank, Germany's largest, has had to clear many operational decisions through Fed officials in either Washington or New York for at least the past year, the WSJ noted, citing sources familiar with the matter. Reports of the Fed assessment follow Deutsche Bank's planned reduction of its U.S. equity and bond market trading divisions and significant jobs cuts under Christian Sewing as the new CEO attempts to reverse years of losses and a loss of investor faith in one of Europe's most important lenders.