IMF: US Only Developed Country Expected to Increase 5-Year Debt to GDP

Identifying runaway debt as a problem is the first step in dealing with it. Then there is the dissonance between the politicians who at once decry the federal budget deficit, then vote for bills that cut taxes and raise spending yet again.

It won’t take much more than the passage of time for the US dollar to be unseated as the de facto global currency. The IMF projects that the US is the only developed country in the world[1] that will increase its debt to GDP ratio over the next five years.

That countries like China and Russia continue to stockpile gold and launch currency initiatives designed to provide alternatives for world investors will only hasten the USD’s decline. 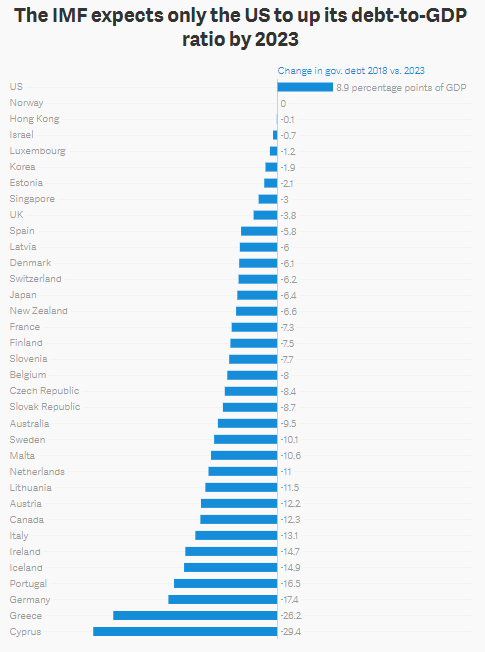 The US dollar is becoming less appealing for investors as American debt continues to soar and the greenback is printed to cover it, investor Jim Rogers said at the St. Petersburg International Economic Forum (SPIEF).

The American currency will lose the status of main reserve currency much sooner than 2030, Rogers said at the Valdai Club’s discussion session, held as part of SPIEF.

“Dollar is going to be higher than now because the turmoil is coming. Then, it is going to be overpriced and people will look around and say, ‘America’s got the largest debt in the history of the world. It’s printing money as fast as it can,’” the investor said.