Among the many contributors to 2008’s Great Recession were credit default swaps (CDSs), largely unregulated casino bets banks make with each other about nearly anything you can think of. Fully accounting for them is ridden with black-box difficulty, and ultimately, big banks essentially say “Don’t worry about them. They’re under control. Trust us.”

Perennial too-big-to-fail problem child Deutsche Bank is close to seeing its stock fall into the single digits, sounding alarm bells reminiscent of when Bear Stearns collapsed and was acquired for $2/share, and when Lehman imploded and went out-and-out bankrupt.

The connection? Deutsche’s CDS book runs to approximately $157T, yes trillion, or roughly twice the GDP of the entire world. The exact threat level this poses to the bank, the stock market, and the global financial community at large is not clear.

But if you found out that a community bank in Iowa had financial commitments valued at twice the GDP of the United States, would their constant assurances not to worry about that little detail put you any more at ease? How small would even an innocent mistake need to be, at that level of liability, to trigger a potentially lethal cascade of chain reactions? 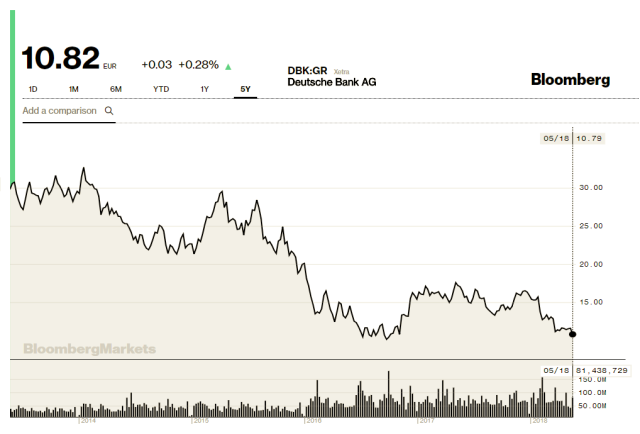 We are not certain why the stock is plummeting, but we do suspect markets are getting a bit concerned about Deutsche’s humungo derivatives book[1], and the global size of the derivatives markets, in general.

Derivatives, especially credit default swaps (CDS), are a legacy of the financial crisis which was ignored and never really dealt with.

Though, we believe it is a small probability, if the markets do run on DB’s derivatives book,[2] even God won’t be able to save it.