One problem gets a fair amount of press, the other very little. One problem, at least, has a solution; the other, maybe not.

US federal debt spending is a problem nobody can seem to stomach the solution for; spending within our means a pill too bitter to swallow. The rapid decrease of the economically productive segment of our population is more dire still, and arrives at a time the country is least able to absorb and mitigate its effects.

The 2020 crisis is the accumulation of the demographic problem which will entail a financial and economic disaster. The world’s most productive populations are ageing and will subsequently disappear.

None of them seems to touch on what is plain to see for us all: the youth in the most productive countries is disappearing at a breathtaking pace. 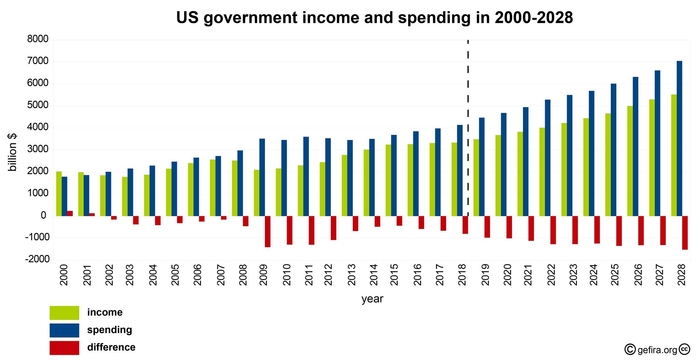 States like the US, France and the UK are attempting to make up for it with the acceptance of unprecedented large numbers of unskilled and even undocumented migrants. The 2008 financial crisis and the 2011 euro crisis are portents of what has yet to come.

The American president is trying to stimulate the economy with a fiscal Keynesian plan. In the coming ten years US federal spending will grow by a stunning 60%, which is a result of increasing social security liabilities and further implementation of the Paul Wolfowitz doctrine of keeping the US as the sole world superpower.

This growth of spending has to be financed by...