When a Flattening Yield Curve Doesn’t Bother Anyone: Bubblenomics

While flattening-yield-curve talk is everywhere, there doesn’t seem to be any real sense of alarm about it.

It’s symptomatic of the times. There is a level of exhaustion in financial news markets; when everything risk just keeps going up, no matter what, after a while it is difficult not to come to the conclusion that reality just doesn’t matter anymore.

That despite the clear problems that exist, the structural fault lines that continue to show clear signs of coming apart, the stock market is just going to continue to melt up forever.

It seems everyone is talking about the yield curve right now. It also seems most economists and investors are quick to dismiss what would typically signal a clear economic warning as nothing worth worrying about. But from where I sit it looks like this could be a red flag worth paying close attention to.

The reason is that the yield curve, or the spread between the yield on the 10-year treasury and the 2-year treasury, appears to lead corporate spreads by about 30 months. In the chart below you’ll notice the close relationship which suggests rising risk aversion among corporate bond investors lags a flattening of the yield curve fairly consistently. 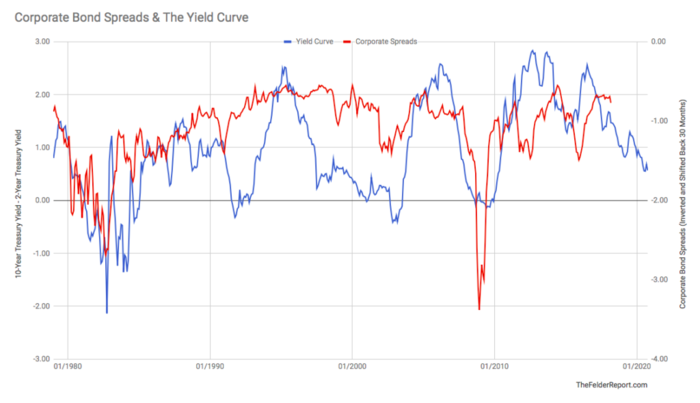 This could simply be due to the fact that a flattening curve is typically the product of rising short-term interest rates which put pressure on corporate balance sheets. Investors possibly respond to this pressure with a lag only after it becomes readily apparent in...