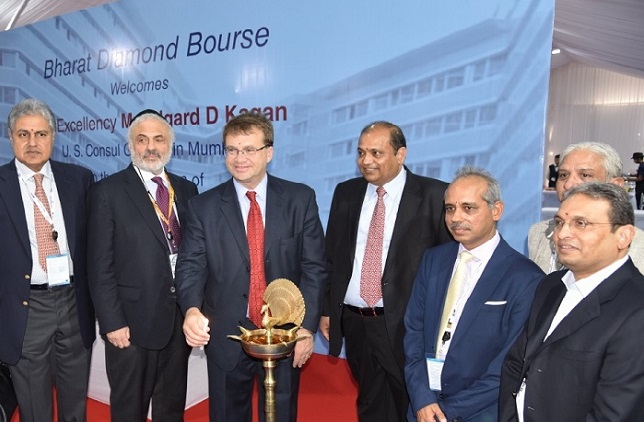 (IDEX Online) – More than 1,000 visitors from India and across the world are taking part in the Bharat Diamond Week at the Bharat Diamond Bourse (BDB) in Mumbai, India, which opened today. The Bharat Diamond Week was officially opened by the US Consul General in Mumbai, His Excellency Mr Edgard D. Kagan. BDB ended registration five days ago due to the widespread interest in the show, which runs from April 23 to 25, and which is taking place in a specially constructed marquee in the grounds of the BDB.<?xml:namespace prefix = "o" ns = "urn:schemas-microsoft-com:office:office" /?>

"After many months of planning and hard work, we are ready to open the first-ever Bharat Diamond Week," said BDB Vice-President Mr Mehul Shah, who heads the Diamond Week project. "I want to thank all the people who have been involved in creating this inaugural event. It has required an extraordinary amount of planning, effort and coordination and now we are seeing the fruits of all this with an incredible show.

"We had a fantastic cricket tournament last week in the run-up to the Diamond Week, with the winning team being the BDB XI. This created a huge amount of interest and excitement in the Indian trade and for the diamond show. Now the show has started and there is a wonderful atmosphere and something of interest for everyone. There will be a gala dinner on April 24 sponsored by Brussels Airlines, and the airline is offering Business Class tickets in a raffle that will be held during the Diamond Week."

BDB President Mr Anoop Mehta said: "There has been a carnival atmosphere at the bourse since...