Free markets dictate that if your business is unsustainable without perpetual gifts of near-zero-percent loans from some magical funding fairy godmother (or the Fed), your business should go out of business.

But ZIRP debt is life support for operationally vegetative companies. And a staggering 15% of the S&P 1,500 will not survive in a rising-interest-rate environment.

Economist Hyman Minsky explained how when things are good, markets tend to take on untenable amounts of risk and debt, pressing their bets until the system is no longer stable and inevitably falls apart.

How little have we learned in the past 10 years? There are fully 3x as many of Minsky's Ponzi companies now as there we before the 2008 crisis. 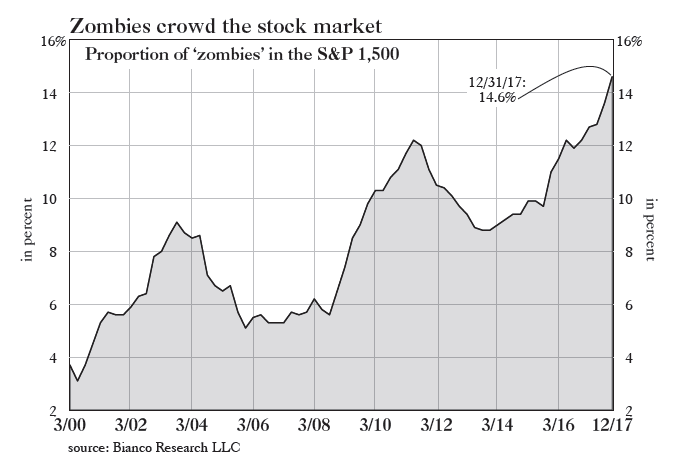 The first theorem of the financial instability hypothesis is that the economy has financing regimes under which it is stable, and financing regimes in which it is unstable. The second theorem of the financial instability hypothesis is that over periods of prolonged prosperity, the economy transits from financial relations that make for a stable system to financial relations that make for an unstable system. In particular, over a protracted period of good times, capitalist economies tend to move from a financial structure dominated by hedge finance units to a structure in which there is large weight to units engaged in speculative and Ponzi finance.

Hedge financing units are those which can fulfill all of their contractual payment obligations by their cash flows… Speculative finance units are units that can meet their payment commitments on “income account” on their liabilities, even as they cannot repay the principle out of income cash flows… For Ponzi units, the cash flows from operations are not sufficient to fulfill either the repayment of principal or the interest due on...