Combine Vlad “The Impaler” Putin, Syria, Brexit, trade jitters and the European banking continuing woes and you get … a catering of Europe’s economic surprise index.

The dimming data — with Russian sanctions and a potential trade war adding to market fears — have also turned Europe into ground zero for a question increasingly bedeviling investors: Has the global synchronized growth story that powered the bull market peaked? It also leaves them with a dilemma: jump back in on the prospect of juicing more gains from an increasingly mature business cycle, or assume the best is now behind them.

The answer will likely hinge on where data goes from here. Even before trade tensions broke out, growth momentum had cooled from lofty levels, with Purchasing Manager Indexes starting to roll over worldwide. The decline in Europe was particularly sharp, and sent the region’s economic surprise index to the lowest since 2012.

“The tone of domestic Europe is weaker than had been anticipated and clearly the trade worries are a compounding factor,” James Bevan, chief investment officer at CCLA Investment Management, told Bloomberg TV.

Once Hot, Now Not

The risk to bulls is that great expectations are already baked into corporate earnings, lowering the bar for disappointments just as cracks emerge in the data. 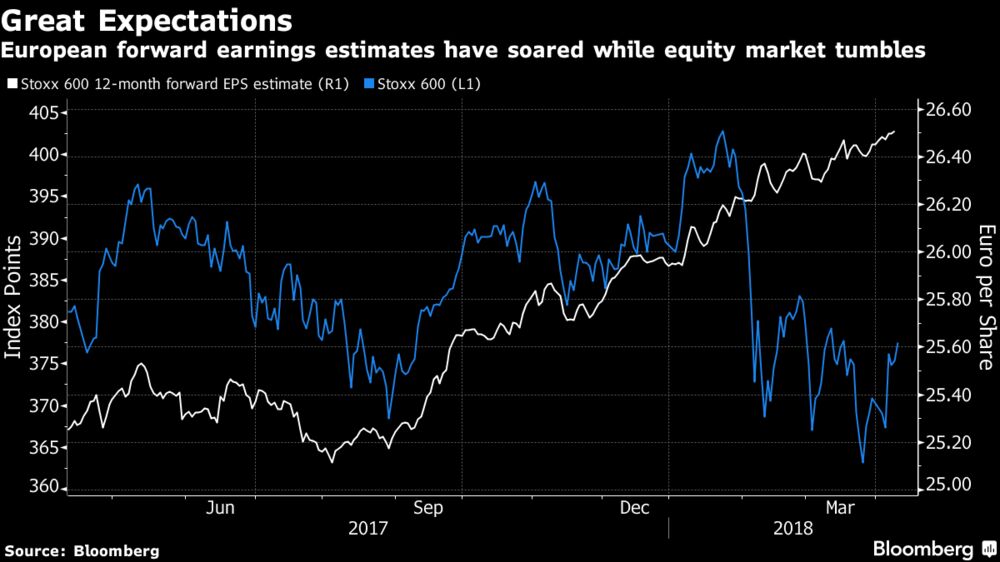 The outperformance of cyclical stocks — which benefit most from economic expansion — over their defensive counterparts has eased from February highs, underscoring the region’s ebbing momentum.

“The negative impact of a data point that underwhelms on either the macro or micro fronts could be more acute given the elevated valuations of global risk assets,” Katie Nixon, chief investment officer of wealth management at Northern Trust...