Many Americans haven’t saved as much money as they need for retirement — and the gap is expected to widen dramatically in the next 30 years.

The retirement savings gap — between what people have and should have — was $28 trillion in the U.S. in 2015, but by 2050, it’s expected to swell to $137 trillion, according to the World Economic Forum[1], a Cologny-Geneva, Switzerland-based nonprofit that researched international financial affairs. The disparity grows $3 trillion every year in the U.S.

The organization calculated this gap assuming most individuals’ retirement income sources would include a combination of government-provided pensions (such as Social Security), employer pensions in the public or private workforce and individual savings. They also analyzed the level of savings across expectations of income needs and life expectancies, assuming individuals would retire between 60 and 70 years old, for countries including China, Canada, Japan and the United Kingdom. 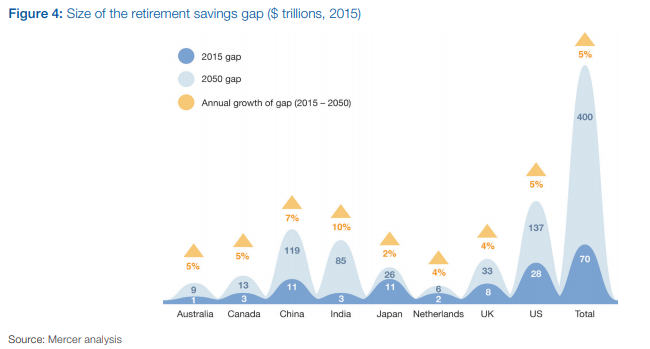 World Economic Forum
The gap is most pronounced in the U.S., followed by China and Japan tied for $11 trillion in 2015. China is also expected to see a significantly wider discrepancy in 2050, at $119 trillion, followed by India, with an $85 trillion gap. Overall, the eight countries the WEF analyzed will see a $400 trillion disparity. WEF identified three key drivers of the shortfall: people are living longer; more informal work structures, like the gig economy, which can lead to uneven income and weak options for retirement savings; a growing middle class, where wages, costs and quality of living and expectations for retirement income are all inflating.